The Day After Judgement by James Blish (Book) 1971 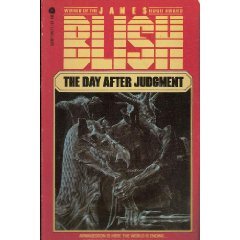 Tweet
Avon
First Avon printing 1982
0380595273
166 pages
Science Fiction
Similar to the earlier Black Easter, this is a slow-paced book where most of the action is left offstage in favor of allowing us to see how the main characters react when they are removed from the action.

There is one good bit of action, the failed attack on Dis by the U.S. Military is described in detail. Despite plot summaries, what this book really is is a question. The question being what happens if/when God is removed, can the vacuum stay, or must something else take the place and fill the vacuum?

This is more Paradise Lost and less end of the world thriller. Reading it knowing that will allow you to enjoy it more than if you were expecting an action filled apocalypse.

As in the first novel, Blish crafts this one well. It is tightly written, though again there is really no tension that builds. Very clinical, very removed observation of catastrophe and the characters. It was an interesting choice he made to do it that way, maybe not the most appealing, but viable and interesting.
... [Full Description]

Other Products from austindridge (View All)