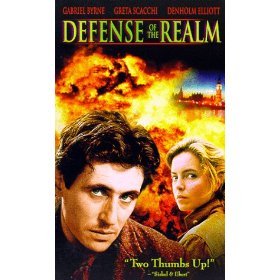 Tweet
In the politically charged atmosphere of Margaret Thatcher's Britain, newspaper reporters are hungry for the big story that will make them stars and their newspapers famous. Nick Mullen (Gabriel Byrne in his first starring role) is one such reporter for the London Daily Dispatch. A top member of Parliament (Ian Bannen) is the focus of the latest political scandal: he has been photographed with a prostitute who is known to have Russian contacts. Nick barrels into the scandal full-bore, despite warnings from his mentor (a deft Denholm Elliott). Nick receives a tip that makes his story a front-page item and he quickly becomes a celebrity himself. But as he soon discovers, there is much more to the story than he imagined. Director David Drury (Prime Suspect 3) keeps this highly complex, John le Carré-esque story moving swiftly. The clues are hard to find at times, but it is not because the story is told unclearly; rather, the filmmakers have decided that audiences can think for themselves and piece together the information along with Nick. An overlooked and truly entertaining thinking person's film.
Embassy
1986
VHS Tape
Ex rental in Nice shape There is a rip at the top of the box cover but otherwise it is fine Tape is good
PG
Drama
Thriller
Gabriel Byrne
Greta Scacchi
Denholm Elliott
... [Full Description]

Other Products from austindridge (View All)