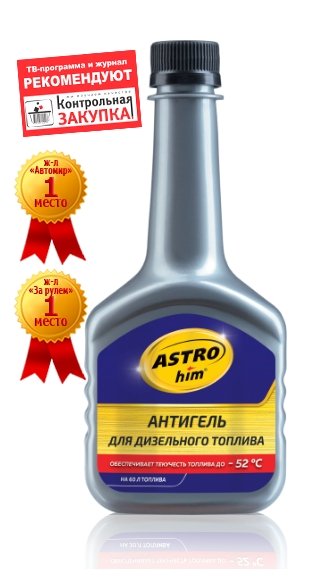 It prevents thickening of diesel fuel due to the formation and growth of paraffin crystals at low temperatures.
Significantly reduces the gelation (freezing) temperature and the limiting temperature of diesel fuel filterability.
Facilitates engine starting.
Reduces fuel consumption.
Extends the service life of injectors and injection pumps.
The composition retains fluidity up to -36 0C.
It is made using a package of additives of the BASF company (Germany).

It is applied to all types of diesel fuel equipment, including the COMMON RAIL system and the "pump nozzle".

How is it that ASTROhim antigel even outperformed American and German counterparts?

The fact is that Russian diesel fuel differs from foreign one. ASTROhim Antigel is developed taking into account the peculiarities of Russian diesel fuel and is produced using the technology and raw materials of the leading chemical concern BASF. This is due to the high performance of the additive.


Recommendations for use:
Shake the contents of the vial. Pour ASTROhim antigel into the fuel tank immediately before refueling at the rate of one bottle per 30 liters of fuel.

It is necessary to introduce the additive at a temperature exceeding the cloud point of diesel fuel - for summer grades of fuel no lower than -5 ° C, for winter grades no lower than -10 ° C.

It is allowed to fill the additive into the tank with the fuel already filled.

The additive maintains fluidity in the bottle to -36 ° C. It thickens at lower temperatures, but retains its properties when heated.

The effectiveness of the additive directly depends on the fractional composition of diesel fuel. An increase in the concentration of antigel does not lead to a significant decrease in the limiting temperature of filterability and the pour point of diesel fuel, while at the same time it is completely safe for all components of the fuel system.
... [Full Description]

Other Products from autodoctorrussia (View All)