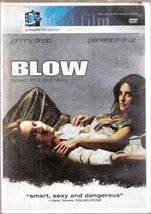 Tweet
Blow (2001) DVD Movie with extra features and behind the scenes. Features Beyond the Movie with interviews of the true story people, George Jung. Script to screen access, Commentary and much more.

Ted Demme's biopic of drug dealer George Jung contains numerous similarities to Martin Scorsese's gangland masterpiece Goodfellas. Ray Liotta is in both films; each begins with a scene in the middle of the story and then flashes back to the protagonist's childhood; each contains a heavy amount of voice-over narration from the central figures; each contains multiple scenes where loved ones admire the gaudy, ostentatious interior design drug money can buy; and both spend much of their last acts showing the physical and emotional ravages of cocaine addiction. In addition to Goodfellas, Blow also recalls Boogie Nights, with its dead-on, late-'70s period clothing and soundtrack, and its desire to show how these seemingly amoral people are simply looking for the nice, stable, supportive family that their mothers denied them.
Johnny Depp finds the lost little boy at the heart of George Jung. As he loses the love of both his mother and his true love (the first to a hypocritical moral superiority, the second to cancer), Depp's Jung emanates a doomed quality that engenders sympathy, though not affection, within the audience. Having a protagonist that is difficult to either hate or like, as well as a familiar visual style, Blow leaves the audience feeling apathetic much of the time. There is an old saying that good artists borrow, and great artists steal. Demme is a good artist. He uses themes, story structures, and shots that he has lifted from films he obviously admires, but he is unable to make them his own
... [Full Description]