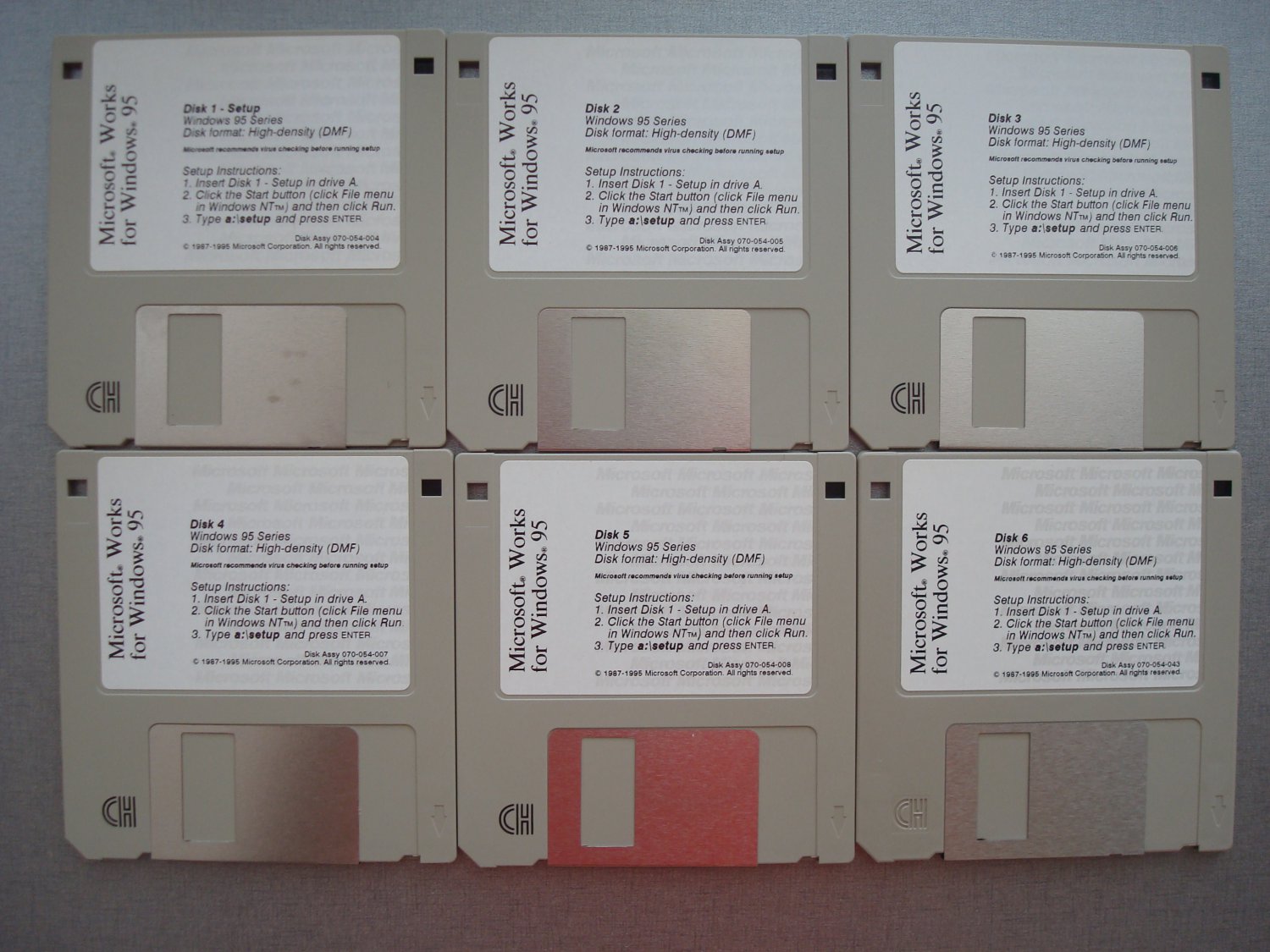 Description:
============
As pictured, Microsoft Works For Windows 95. Disks have been spot-checked, can provide electronic disk images if needed.

Warranty and Returns:
=====================
We understand that there may be compatibility issues, space constraints, or it just doesnŌĆÖt look perfect. This item can be returned within 14-days for ANY reason. However, shipping to and from is not refundable.

Microsoft Works was a productivity software suite developed by Microsoft, sold from 1987 to 2009. Its core functionality included a word processor, a spreadsheet and a database management system. Later versions had a calendar application and a dictionary while older releases included a terminal emulator. Works was available as a standalone program, and as part of a namesake home productivity suite. Because of its low cost ($40 retail, or as low as $2 OEM),[1] companies frequently pre-installed Works on their low-cost machines. Works was smaller, less expensive, and had fewer features than Microsoft Office and other major office suites available at the time.

History
Microsoft Works originated as MouseWorks, an integrated spreadsheet, word processor and database program, designed for the Macintosh by ex-Apple employee Don Williams and Rupert Lissner.[2] Williams was planning to emulate the success of AppleWorks, a similar product for Apple II computers. Bill Gates and his Head of Acquisitions, Alan M. Boyd, convinced Williams to license the product to Microsoft instead.[3] Initially it was to be a scaled-down version of Office for the (then) small laptops such as the Radio Shack TRS-80 Model 100 which Microsoft was developing. As laptops grew in power, Microsoft Works, as it was to be called, evolved as a popular product in its own right.

Microsoft released Macintosh versions of Works starting with Works 2.0 in 1988. The version numbering roughly followed that of Windows releases.

Through version 4.5a, Works used a monolithic program architecture whereby its word processor, spreadsheet and database documents ran in windows of the same program interface. This resulted in a small memory and disk footprint, which enabled it to run on slower computers with requirements as low as 6 MB of RAM and 12 MB free disk space. It also provided a mini version of Excel for DOS systems as a DOS version of that program was not available.[5] Works 2000 (Version 5.0) switched to a modular architecture which opens each document as a separate instance and uses the print engine from Internet Explorer.

In late 2009, Microsoft announced it was discontinuing Works and replacing it with Office 2010 Starter Edition.[7][8]

This section needs additional citations for verification. Please help improve this article by adding citations to reliable sources. Unsourced material may be challenged and removed.
Find sources: "Microsoft Works" ŌĆō news ┬Ę newspapers ┬Ę books ┬Ę scholar ┬Ę JSTOR (April 2017) (Learn how and when to remove this template message)
Microsoft Works has built-in compatibility for the Microsoft Office document formats (DOC and XLS), including, but not limited to, the ability of the Works Word Processor to open Microsoft Word documents and the ability of the Works Spreadsheet to open Microsoft Excel workbooks. Newer[which?] versions include task panes but do not include significantly updated features. Even in the final version (Version 9.0), the Windows 95-era icons and toolbars were not updated to make them consistent with later application software.

While its utility for larger organizations is limited by its use of incompatible proprietary native .WKS (spreadsheet), .WDB (database), and .WPS (word processor) file formats, the simplicity of integrating database/spreadsheet data into word processor documents (e.g., mail merge) allow it to remain an option for some small and home-based business owners. Version 4.5a is particularly noted in this respect.[citation needed] The database management system, while a "flat file" (i.e., non-relational) allows the novice user to perform complex transformations through formulas (which use standard algebraic syntax and can be self-referential) and user-defined reports which can be copied as text to the clipboard. A 'Works Portfolio' utility offers Microsoft Binder-like functionality.

By installing the 2007 Office System Compatibility Pack, the Works Word Processor and Spreadsheet can import and export Office Open XML document formats, although they are converted rather than being operated upon natively. The Works Calendar can store appointments, integrates with the Windows Address Book, as well as Address Book's successor, Windows Contacts, and can remind users of birthdays and anniversaries. It supports importing and exporting iCalendar (.ICS) files. It does not support subscribing to iCalendar files or publishing them online via WebDAV. Up to version 8, using the Works Task Launcher, the calendar and contacts from Windows Address Book could be synchronized with portable devices. In Works 9.0, the sync capability has been removed.[9]

File format compatibility
Microsoft makes file format conversion filters for Microsoft Word for opening and saving to Works Word Processor format.[10][11] Microsoft Office Excel can import newer Works Spreadsheets because the newer Works Spreadsheet also uses the Excel format but with a different extension (*.xlr).[12] There is an import filter for older Works 2.0 spreadsheet format (*.wks);[13] however it may be disabled in the registry by newer Microsoft Office Service packs.[14] As far as Works Spreadsheet 3.x/4.x/2000 (*.wks) and Works database (any version of *.wdb) files are concerned, Microsoft does not provide an import filter for Excel or Access. There are third party converters available for converting these filetypes to Excel spreadsheets: For database files (*.wdb) there is also a donateware utility;[15] for spreadsheet (*.wks) and database (*.wdb) files a commercial solution is available.[16]

One commercially available solution for converting to and from Microsoft Works files on the Macintosh platform is the MacLinkPlus product from DataViz. Free online conversion services are also available.[20]