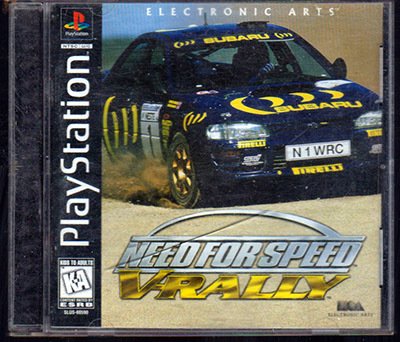 Tweet
Need For Speed (VRally), Playstation Original Game. 1997 by Electronic Arts.
Need For Speed: V-Rally is the latest Electronic Arts entry into the racing world. However, don't be fooled by the title. This game has nothing in common with the previous NFS games, and wasn't even programmed by the same team. EA simply picked up the rights to V-Rally, brought it over from Europe, and slapped the NFS name on it..

EA also ported over all 42 tracks and 11 cars as well, an impressive lineup compared to most racing games. This is one of V-Rally's biggest draws, because even though there are so many tracks, they don't suffer from weak layout or boring level design. Each track has its own look, and there are plenty of conditions (dirt, asphalt, snow, rain) to race in. Rally fans take note, the car lineup is a nice collection of rally cars, including the Subaru Impreza, Mitsubishi Lancer, and various other name brand cars.