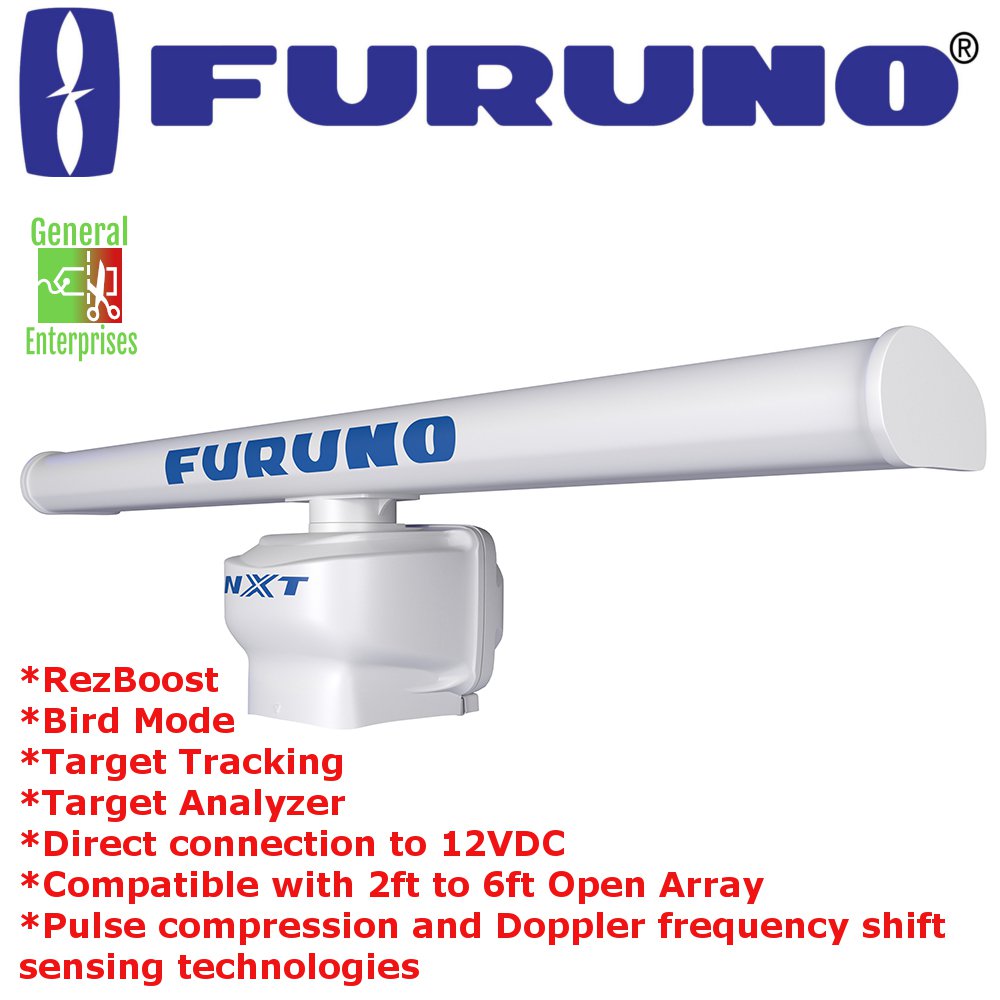 The DRS6ANXT leverages the same pulse compression and Doppler frequency shift sensing technologies featured in the DRS4DNXT, as well as offering the same simplified connection with TZtouch and TZtouch2. Additionally, the DRS6ANXT offers direct connection to 12VDC power for cable runs up to 10 meters (standard supply), without the need for an external power supply. With the introduction of the new DRS6ANXT, your recreational and commercial customers now have Furuno Solid State Radar options, ranging from a 24" Radome (DRS4DNXT) to a 6-foot Open Array (DRS6ANXT), providing the perfect NXT generation solution for vessels of all shapes and sizes.

Target Analyzer
Target Analyzer may be one of the most innovative and revolutionary features available in the NXT family, automatically changing the color of targets approaching your boat to clearly show potential hazards. Green echoes represent stationary targets, land, or approaching targets moving at a velocity of less than 3 knots. Echoes dynamically turn red when targets are approaching your vessel at a speed of 3 knots or faster. It works the same when you are following another vessel. If the target is getting closer at a speed of 3 knots or more, the echo will be depicted in red. Incredibly, Target Analyzer works independently of one's own ship speed!

Target Tracking
Interpreting and tracking threats is easier than ever with NXT Radars. Using Furuno's advanced Doppler technology, NXT Radars acquire and track targets in virtually every sweep. Almost instantly, you'll see the target's speed and course vector, and if the target is hazardous, it will also be displayed in red, making it easier to identify and predict its course. The NXT Radar's incredible ARPA signal processor tracks and displays up to 100 targets! The entire target theater can be viewed, monitored, and tracked simultaneously, at any range. For an even more detailed display, target trails and Furuno's unique True Trail feature can be utilized, allowing you to graphically see the direction in which a target is moving, independent of your own vessel's motion.

Bird Mode
Bird Mode is another standard feature found in NXT Radars. With a single selection on the MFD, the Radar automatically adjusts settings for echo enhancement to help locate birds. Of course, finding birds is an important step to zeroing-in on the bite.

Other Products from generalenterprises (View All)