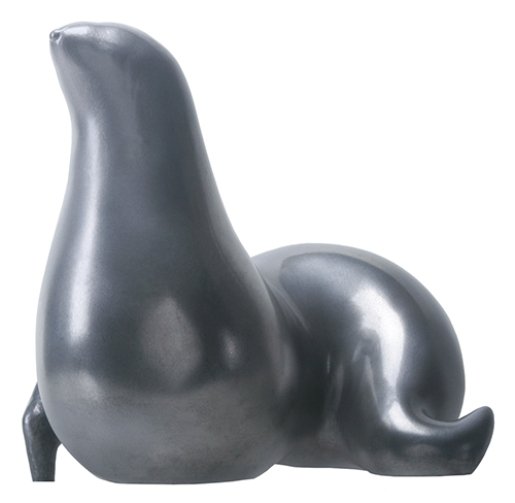 In the 1930's Wright created a series of whimsical animals that were both decorative and functional. These abstract and stylized figures became bookends, corkscrews, fireplace andirons, candlesticks, bottle stoppers, ashtray/candy dish, door stop and even a desk set. The figures were figuratively animated, characterized and endeared by the names he gave them. This figure is a reproduction of Wright's circus "Seal". Soft abstract lines were used to capture the shape and features of his popular animal seen at the circus, zoo or aquarium. Wright was a frequent visitor to the Central Park Zoo. Seals fascinated him as they gracefully swam through the water despite their large size and weight. Designed to be a paperweight, but also was used as a decorative accessory. Wright named this fun, charming, loveable, and his most favorite animal...Whoozoo.

Made of resin with as pewter steel finish

This authentic product has been authorized by Russell Wright Studios

Russell Wright (April 3, 1904 - December 21, 1976) considered to be the most prolific American Industrial Designer of the 20th Century. His method of design generated from the philosophy "the table was the center of the home." His concept of informal living was interpreted into many products including tableware, dinnerware, furniture, home furnishings and housewares. The products he created influenced modernism, for the home, from the 1930's through the 1950's. Manitoga is an organization dedicated to preserving the home and garden at his private estate in Garrison, New York. The property is designated as a National Historic Landmark and open to the public for tours.

All of our items are in stock and ready to ship. They are personally inspected and not drop shipped from some warehouse causing you long delays in receipt of the item, issues with the condition or inflated shipping rates to account for the drop ship fee.