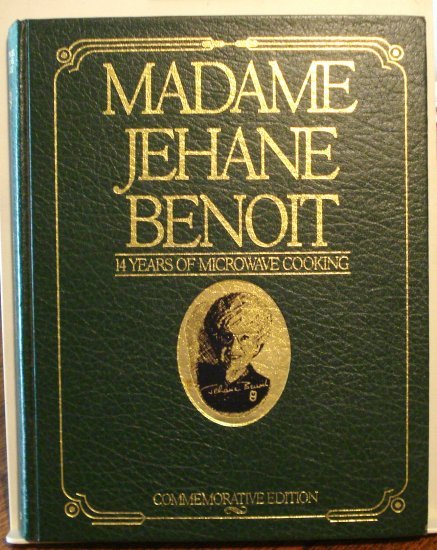 Tweet
This is such a marvelous cookbook. I should keep it and finally learn to use my microwave for something besides popcorn and reheating day old coffee.

This is a special commemorative edition bound in pebbled green faux leather and printed with gold. The book has a red satin ribbon book mark. It was published in 1988 by Les Editions Heritage Inc. It is a large format and filled with detailed recipes with large color photos, charts and graphs. It is 384 pages including alphabetical and category indexes.

The recipes include everything from sauces to veal chops to scalloped potatoes to roast turkey (microwave and convection combined), to Christmas plum pudding. Instructions are very detailed.

This is a very excellent cookbook for the collector, serious cook, or someone like me who is still trying to figure out what to do with the microwave. Condition is near fine. No marks or signs of use. The lower corners of the faux leather shows slight rubbing.

Madame Benoit lived from 1904 to 1987. She was born in Montreal and was educated by the nuns, receiving her B.A. in Paris. She wanted to study acting but knowing her parents would not abide such a choice, she lied and said she wanted to study cooking at the Sorbonne, not even knowing if such a program existed. To her surprise it did and she was accepted into the program headed by Dr. Edouard de Pomiane. Mother returned to Canada happy and quite by accident Jehane got interested in her studies. She took to cooking and food preparation naturally. Her mother's family were bakers and her father's family demanded perfection on the table.

She spent 4 years studying with de Pomiane working in Paris restaurants in summers. She returned to Canada and in the early 1930s opened a cooking school with the purpose of teaching housewives who "needed to learn the basic principles of cooking in order to fulfill their duties as housewives...."

Her students convinced her to serve meals and she opened the Salad Bar restaurant serving lunch which soon expanded to serve dinner and replaced the cooking school. This endeavor ended mid way through WWII when fire destroyed her building. She began a radio program advising listeners on cooking methods during the long period of rationing.

At age 48 Jehane began her television career and was an early predecessor of Martha Stewart. She contributed to magazines for the next 20 years publishing numerous collections of her recipes. In 1973 she was made an Officer of the Order of Canada.

Late in her life Panasonic asked her to create recipes for the microwave. Her task was to demonstrate that the microwave was truly revolutionary and not just meant for reheating and TV dinners. The recipes she created and which are included in this cookbook are a combination of French, English and American recipes. Traditional dishes made with the latest equipment.
The ISBN is 2-7625-5980-4.

Please note that if you are willing to wait this book can be shipped media mail only in the US at a much lower shipping fee. Email me if you want to save money.