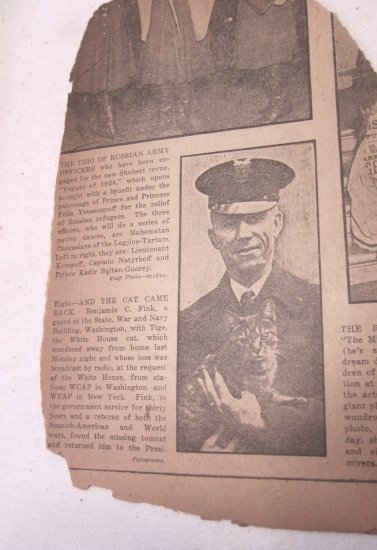 > Wonderful historical political clipping from 1924
> Article is entitled AND THE CAT CAME BACK
> Clipping is undated, but the date of the Tige incident is known, and, based on the reverse side arts listings (at Carnegie Hall, etc.), the article was printed in a New York newspaper
> Tige was the White House tomcat during the Coolidge Administration, and the article features a 2 x 4.5 inch photograph of Tige being held by Benjamin C. Fink, who found the missing cat and returned him to a presumably grateful President Calvin Coolidge
> Article describes the incident and the background of Benjamin C. Fink, a guard at the "State, War and Navy Building" in Washington, D.C. and a veteran of "both the Spanish-American and World Wars."

CONDITION: Clipping has yellowed from age, has uneven edges and is very fragile. A few words at the end of the Tige article are torn off at the lower left side, and there is about a 1 inch tear in the article on the left side.

Ships worldwide. If shipping cost to your location is not shown, please contact seller for a shipping quote and invoice for your purchase.
... [Full Description]

Other Products from wilbere (View All)