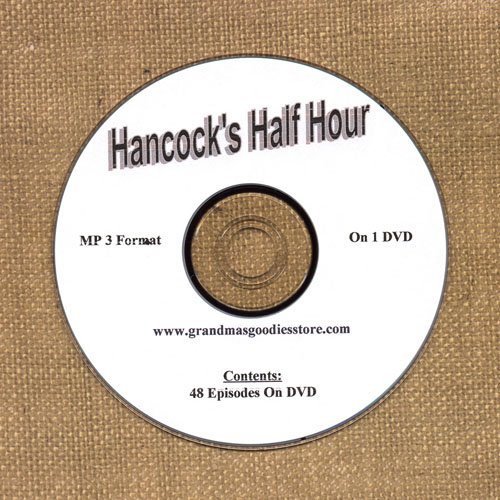 Hancock's Half Hour
48 Episodes on DVD

The show was written by Ray Galton and Alan Simpson, and produced by Dennis Main Wilson. After Main Wilson departed for his television career, his role was taken by Tom Ronald. The distinctive tuba-based theme tune was composed by Wally Stott.

Comedian Tony Hancock starred in the show, playing an exaggerated version of his own character, as a down-at-heel comedian living at the dilapidated 23 Railway Cuttings in East Cheam. The comedy actor Sid James played a criminally-inclined confidant of Hancock, who usually succeeded in conning him each week; Bill Kerr appeared as Hancock's Australian lodger, a character who became noticeably dim-witted in the later shows. A young Kenneth Williams, taking his first job in comedy, provided the funny voices for all the minor characters in the show each week. Moira Lister appeared in the first series, before being replaced by Andrée Melly for the next two; both women played love interest for Hancock's character, in essentially straight roles. In the fourth and fifth series a comedienne, Hattie Jacques, provided comedy in the female role as the harridan Grizelda Pugh, who was Hancock's secretary and Sid's occasional girlfriend.

The series broke with the variety tradition which was then dominant in British radio comedy, highlighting a new genre: the sitcom or situation comedy. Instead of the traditional variety mix of sketches, guest stars and musical interludes, the show's humour derived from characters and situations developed in a half-hour storyline. This relatively novel format, of what was in effect a single sketch each week lasting the entire half-hour (and always featuring the same characters), was reflected in the show's title, which aptly described the series as Hancock's "half-hour". Roger Wilmut, who authored a biography of Tony Hancock as a performer, credits two earlier British radio comedy shows with establishing an uninterrupted 30 minute sitcom format: A Life of Bliss written by Godfrey Harrison and Life with the Lyons, a programme heavily based on the US tradition of sitcoms; he therefore dismisses the notion that Galton and Simpson invented the genre.

THERE ARE 48 SHOWS ON 1 DVD AND THEY ARE IN MP3 FORMAT. THEY WILL PLAY ON ANY COMPUTER AND SOME CD PLAYERS THAT ARE MARKED PLAYS MP3s. YOU CAN EASILY BURN THEM TO A CD SO YOU CAN PLAY ON YOUR CAR SYSTEM. I HAVE THEM ON MY ZUNE AND ONE OF MY FRIENDS HAS THEM ON HIS I-POD. REMEMBER THEY ARE IN MP3 FORMAT AND WILL NOT PLAY ON MOST CD PLAYERS.


SHIP TO CANADA AND UK