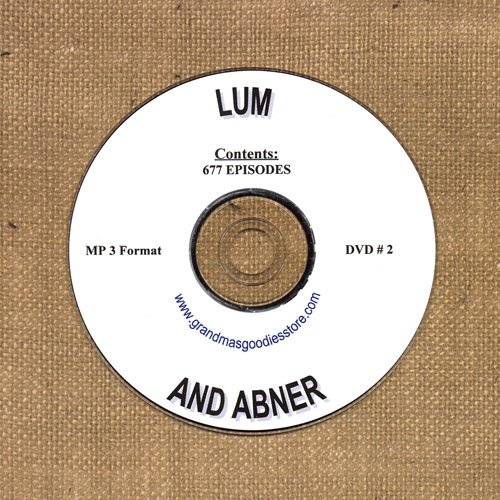 Lum and Abner" aired as a fifteen-minute comedy serial from 1931 thru 1948, finally becoming a half-hour weekly comedy series from 1948-1950. It returned to its more familiar quarter-hour format in 1953, finally ending its run in 1954. These subtle and witty shows star Chester Lauck and Norris "Tuffy" Goff as Lum Edwards and Abner Peabody, owners and proprietors of the Jot 'Em Down Store in Pine Ridge, Arkansas. Lauck and Goff were both born and raised in Arkansas and always maintained a strong love and affection for the characters they met and grew up with in their home state - quirks and all. The timeless and colorful characters they created for the show - most portrayed by Lauck and Goff themselves - make listening to "Lum and Abner" just as enjoyable and entertaining an experience today as it was when the shows were first aired many decades ago.

During its run, "Lum and Abner" was heard on practically every radio network in existence, starting with NBC (Red and Blue simultaneously ), bouncing to Dallas-Fort Worth's WFAA and WBAP only, back to NBC, then to Cincinnati only, then being one of the first programs on the fledgling Mutual Network, back to NBC, to CBS... "Doggies, Lum, stop this merry-go-round!" By 1944, "the boys" were broadcasting for Miles Laboratories on the almost-new network ABC, formerly the NBC Blue Network. Being a small network, the Keystone Broadcasting System recorded each program for distribution to stations not connected directly to ABC, providing national coverage for "Lum and Abner" and making it possible for these classic episodes to exist today. The listener will notice a lack of openings and closings on these recordings due to the fact that Keystone supplied a standardized version on a separate 12-inch record during this period.


THERE ARE 677 Episodes ON 1 DVD AND THEY ARE IN MP3 FORMAT. THEY WILL PLAY ON ANY COMPUTER AND SOME CD PLAYERS THAT ARE MARKED PLAYS MP3s. YOU CAN EASILY BURN THEM TO A CD SO YOU CAN PLAY ON YOUR CAR SYSTEM. I HAVE THEM ON MY ZUNE AND ONE OF MY FRIENDS HAS THEM ON HIS I-POD. REMEMBER THEY ARE IN MP3 FORMAT AND WILL NOT PLAY ON MOST CD PLAYERS.