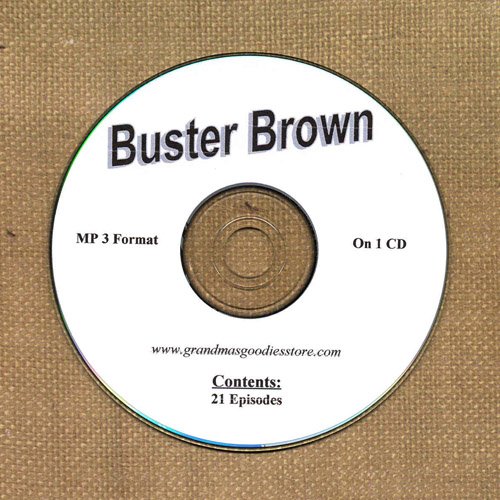 This Saturday morning children’s show is hosted by Smilin’ Ed McConnell. He also plays various characters in the show, such as Squeeky the Mouse, Grandie the Piano, Midnight the Cat, and Froggy the Gremlin.

Buster Brown began as a comic strip until it was bought by a shoe company and made into a old time radio show for children. The comic strip was printed between the years 1933 and 1973 and thrilled children over many generations.

In the radio series, McConnell, a jovial fat man who often joked about his weight, was a former dishwasher and prizefighter. Buster Brown, a boy who lives in a shoe, is played by Jerry Marin. The show always began with the theme song, “I got shoes. You got shoes. Why, everybody’s got to have shoes! And there’s only one kinda shoes for me – good ole Buster Brown Shoes!” The show always ended with Grandie the Piano’s final thump.

Smilin’ Ed’s Buster Brown Gang continued on as a GREAT television program in 1950.

THERE ARE 21 Episodes ON 1 CD AND THEY ARE IN MP3 FORMAT. THEY WILL PLAY ON ANY COMPUTER AND SOME CD PLAYERS THAT ARE MARKED PLAYS MP3s. YOU CAN EASILY BURN THEM TO A CD SO YOU CAN PLAY ON YOUR CAR SYSTEM. I HAVE THEM ON MY ZUNE AND ONE OF MY FRIENDS HAS THEM ON HIS I-POD. REMEMBER THEY ARE IN MP3 FORMAT AND WILL NOT PLAY ON MOST CD PLAYERS.