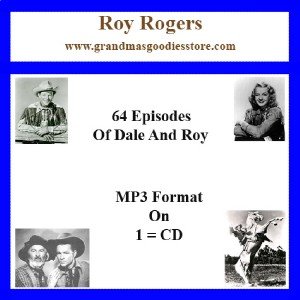 
The shows from the early 50's are still in the earlier mode of some action in a storyline, whether it be outlaws, or tall tales, or a good old-fashioned deed to the ranch cliffhanger.

Somewhere the story is broken up by song, with "The Sons of the Pioneers" and Roy and Dale. The music was always first rate Hollywood-style western music, excellently played. Roy featured other singers as well, some not country or western. Sidekicks included the great

Gabby Hayes, then Pat Brady, who went on to TV with Roy and Dale, and for a time in 1951, Forrest Lewis. Of course, "Happy Trails" was a closing theme, with the equally popular "It's Round-up Time on the Double-R-Bar." Roy was a fine singer, actor, and riding Trigger, a pretty good cowboy, too.

Throughout the 1940s and '50s, Roy Rogers and Dale Evans reigned as king and queen of not only the box office but also of pretty much anything related to the mythos of the Old West. Their iconic status, while somewhat manufactured by Hollywood, was based on true chemistry between the two actors as well as genuine singing talent. In the '30s, Rogers helped to form the seminal Early Country act the Sons of the Pioneers, and later in his career he was often backed by Spade Cooley and his Buckle-Busters. The duo's main scope of influence was on the screen, but they added several songs to the country music lexicon, "Hi-Yo Silver" and "Happy Trails" being the most widely recognized.

THERE ARE 64 Episodes of Roy Rogers ON 1 CD AND THEY ARE IN MP3 FORMAT. THEY WILL PLAY ON ANY COMPUTER AND SOME CD PLAYERS THAT ARE MARKED PLAYS MP3s. YOU CAN EASILY BURN THEM TO A CD SO YOU CAN PLAY ON YOUR CAR SYSTEM. I HAVE THEM ON MY ZUNE AND ONE OF MY FRIENDS HAS THEM ON HIS I-POD. REMEMBER THEY ARE IN MP3 FORMAT AND WILL NOT PLAY ON MOST CD PLAYERS.