Swords And Serpents NES game only 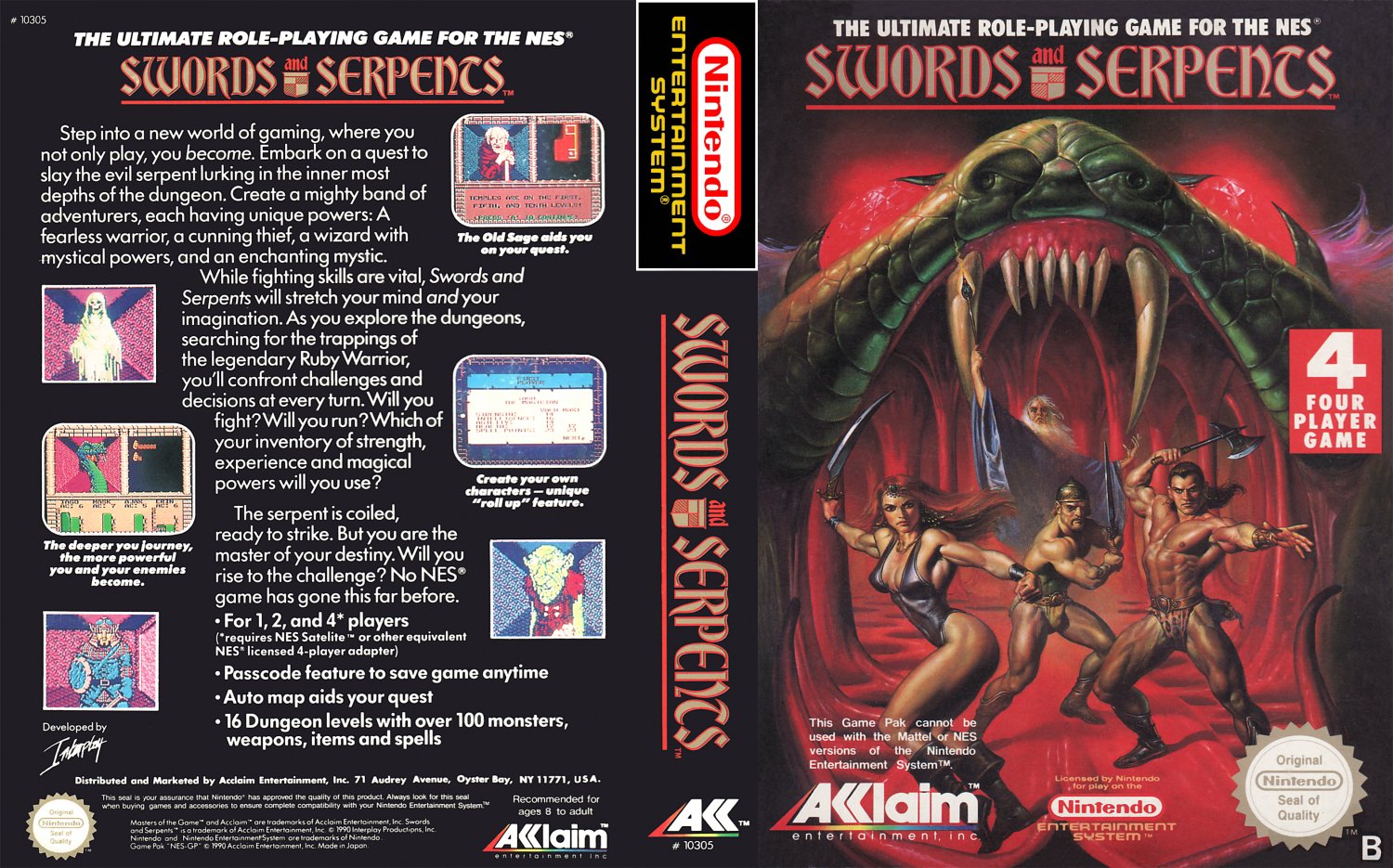 words and Serpents is a fantasy role-playing video game developed by Interplay Productions for the Nintendo Entertainment System. In this game, the player controls a party of four adventurers on a dungeon-crawling quest to destroy a terrible serpent. Along the way, the party encounters an onslaught of fantasy monsters and collects gold and treasure while gaining experience points needed to raise their individual attributes, as well as purchasing equipment from shops within the dungeon. Swords and Serpents focuses mainly on gameplay and contains very little plot development.Swords and Serpents can be played by one, two, or four players (by use of the NES Satellite or other 4-player adapter[1]). Control of the characters is divided evenly among the number of players, but one player must be chosen as the party leader to control navigation through the game. Upon starting the game, the player creates a party of four adventurers, choosing one of three available classes for each character: warrior, thief or magician. Warriors have high strength and can have greater defense by wearing heavy armor. Thieves have moderate strength and defense but higher speed and agility compared to warriors, they also have the rare ability to land a critical hit that kills a single enemy regardless of how much health they have left. Wizards have the lowest amount of strength and defense but can cast spells that heal the party, damage enemies and enhance dungeon traversal. Character statistics can be randomly generated, or the player can choose a prefabricated party which includes characters of each class plus another magician. Continuing the game requires the player to record and later input five passwords: one password for each character, and a fifth password for overall game progress.

Gameplay is simple. The player navigates through a crude representation of a dungeon, presented in split-screen format which allows the player to simultaneously view the dungeon from a first-person perspective and a simple map of the current level showing the party's location. Encounters with monsters occur randomly (and occasionally in specific locations), during which the map is replaced by gauges representing the creatures' health. During the turn-based fights, the player controls the characters' actions to attack, cast magic spells, or flee. Pressing A causes a character to launch a general physical attack, but by holding a direction on the D-Pad while pressing A, the player(s) can attack a certain part of the enemy's body to possibly cause greater damage. The entire game takes place in an underground dungeon composed of 16 levels, with the serpent at the end.
... [Full Description]