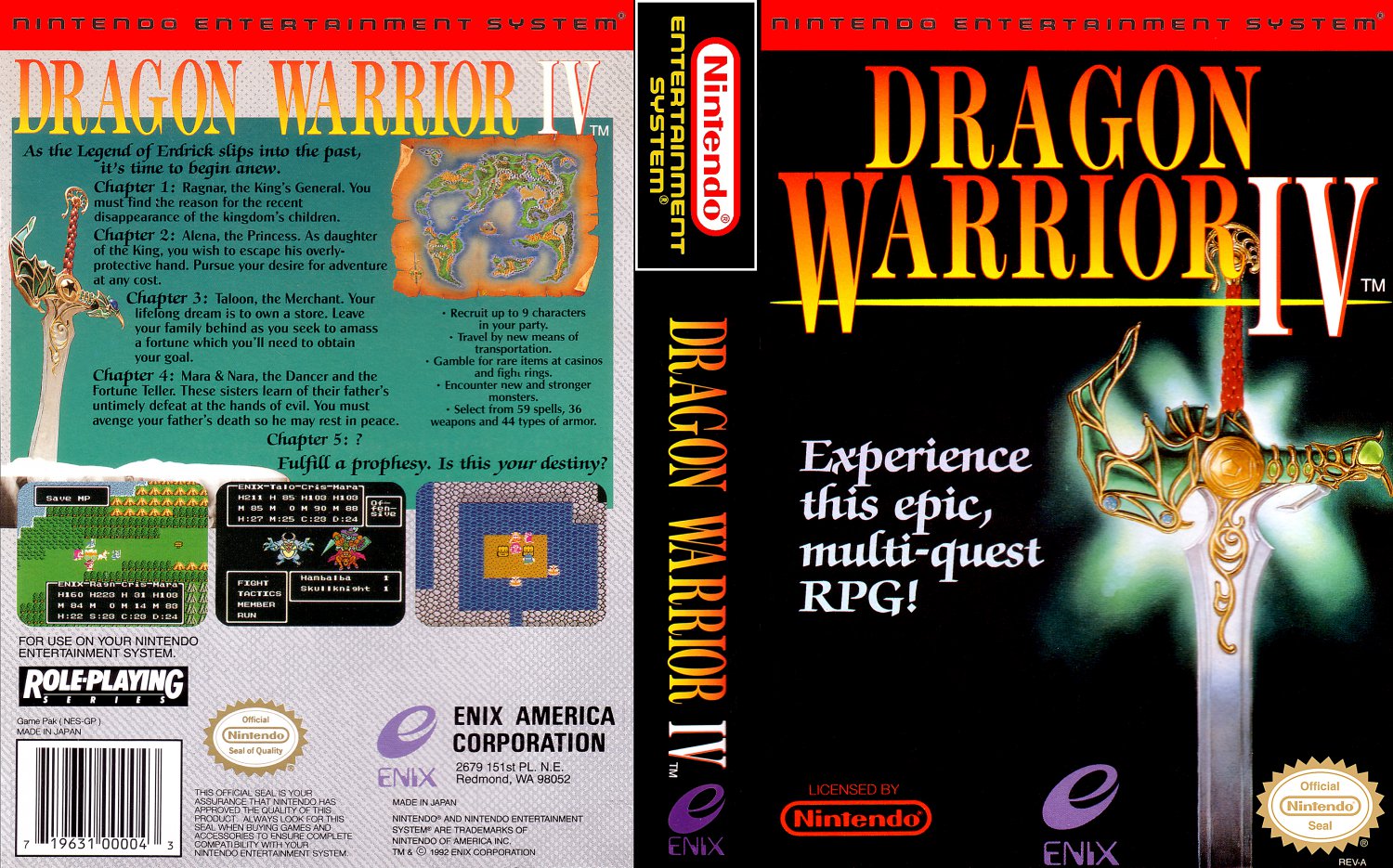 In the original version, the game is divided into five chapters. The first four provide back-story for the Hero's party members, while the fifth follows the Hero themself as they meet up with the other characters.

Chapter One follows the soldier Ragnar, who is tasked by the King of Burland to find children who have gone missing from a nearby town. Ragnar finds and defeats the monster responsible for the abductions and returns the children to their homes. In doing so, he learns the monsters were looking for the Legendary Hero, who is supposedly still a child, in order to kill them. Ragnar decides to leave his home and set out on a quest to protect them.[10]

Chapter Two follows the tomboyish Princess Alena and her two friends and mentors, tutor Borya and chancellor Kiryl, as she travels to prove her strength.[10] Partway through her journey, Alena's father loses his voice after speaking of a dream he had depicting the end of the world. After restoring his voice, she travels to the town of Endor to enter a fighting tournament. She defeats all of the combatants except a warrior named Psaro the Manslayer, who fails to appear. After the victory, she returns to her home castle to find all the inhabitants have gone missing, so she sets out to find out what happened to everyone.

Chapter Three follows the merchant Torneko, a humble merchant working in a weapon shop in his hometown with his wife and young son. His dream is to own his own shop and be the world's greatest merchant. As he travels and performs favors at the towns he visits, Torneko eventually obtains permission to purchase a shop in Endor. Torneko is soon able to obtain the funds to purchase the shop and move his family to Endor. After establishing a successful business with his wife, he hears about a set of legendary weapons, which he sets out to find by funding the construction of an underground passageway to a neighboring continent.

Chapter Four follows the dancer Maya and the fortuneteller Meena, two sisters seeking revenge for the murder of their father by his former student Balzack. By teaming up with a former student of their father, Oojam, they manage to plot a way into the Palais de Léon and find the man responsible. They attempt to avenge their father's murder by defeating Balzack but are quickly defeated by Balzack's master, the Marquis de Léon, and are thrown in the dungeon. Oojam sacrifices himself to allow the sisters to escape the castle. They then decide to flee the continent and head for Endor, where they hope to learn more about their new foe and about the Legendary Hero, whom they became aware of during their travels.

Chapter Five follows the game's protagonist, known as "the Hero".[10] It begins with the Hero's hometown being attacked by monsters, led by Psaro the Manslayer. The Hero manages to escape, and is joined by the main characters of the previous chapters. Together, they accomplish various deeds, such as defeating Marquis de Léon and Balzack, as well as collecting various pieces of Zenithian Armor, equipment that can only be worn by the one chosen to save the world. Later, they spy on Psaro and discover that Estark, the Ruler of Evil, has been awakened. They then travel to Estark's palace and defeat him just as Psaro's followers discover him.

In the town of Strathbaile, the heroes have a dream that explains Psaro's plan.[12] Developing a deep hatred of humanity after the death of his elven girlfriend, Rose, at the hands of humans, Psaro plans to become the next Ruler of Evil using the power of evolution he obtained from the "Armlet of Transmutation". The party then complete the set of Zenithian armor to permit entry into the Zenithian Castle. There, they meet the Zenith Dragon, who guides them to Nadiria, where Psaro is undergoing his evolution into the new Ruler of Evil. There, they defeat his generals before challenging him. After fighting a continually evolving form of Psaro, he is vanquished.

The PlayStation and DS remakes include a sixth chapter that acts as an alternate ending. This chapter focuses on the heroes working with Psaro to avenge the death of Rose, and finally put the world back in order. Throughout this chapter, Rose is revived and the party is able to defeat her true killer, the Dark Priest Aamon, one of Psaro the Manslayer's subordinates who intended to take the secrets of evolution for himself and usurp him, setting all plans in motion that drove Psaro to his insanity
... [Full Description]