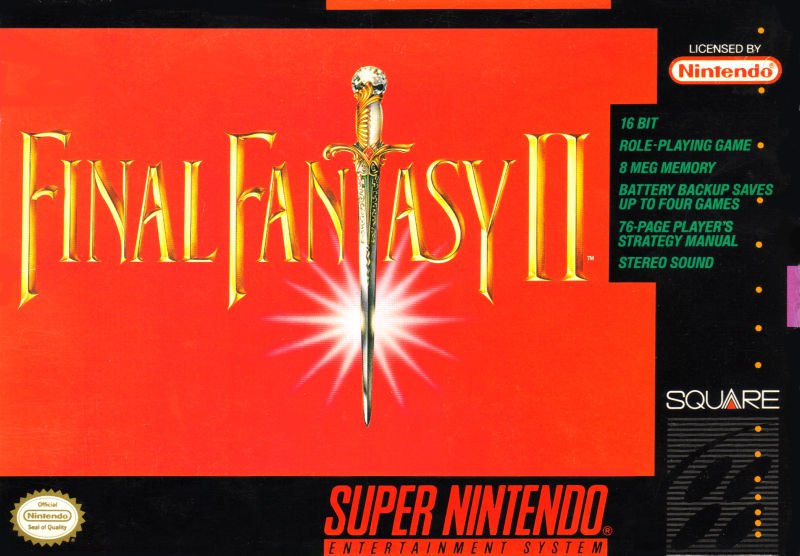 The Red Wings attack the city of Mysidia to steal their Water Crystal, and return to the Kingdom of Baron. When Cecil, Captain of the Red Wings, afterwards questions the king's motives, he is stripped of his rank and sent with Kain, his friend and Captain of the Dragoons, to deliver a ring to the Village of Mist.[21] There, Kain and Cecil watch in horror as monsters burst forth from inside the ring and lay waste to the village. A young girl, Rydia, is the only survivor and summons a monster named Titan in anger. This monster causes an earthquake, separating Cecil and Kain.[22] Cecil awakens afterward and takes the wounded Rydia to a nearby inn. Baron soldiers come for Rydia but Cecil defends her,[23] and she joins him on his journey.

It is revealed that Rosa, Cecil's love interest, had followed him and is extremely ill with a fever. Soon after this, Cecil and Rydia meet Tellah, who is going to Damcyan Castle to retrieve his eloping daughter, Anna.[24] However, Anna is killed when the Red Wings bomb the castle. Edward, Anna's lover and the prince of Damcyan, explains that the Red Wings' new commander, Golbez, did this to steal the Fire Crystal for Baron as they had stolen the Water Crystal from Mysidia.[25] Tellah leaves the party to exact revenge on Golbez for Anna's death.[26] After finding a cure for Rosa, the party decides to go to Fabul to protect the Wind Crystal. On the way there they meet Master Yang, a warrior monk serviced to the kingdom and the protection of the crystal. The Red Wings attack Fabul, and Kain reappears as one of Golbez's servants. He attacks and defeats Cecil; when Rosa intervenes, Golbez kidnaps her and Kain takes the crystal.[27] On the way back to Baron, the party is attacked by Leviathan and separated.

Cecil awakes alone near Mysidia. When he enters the town, he finds that its residents deeply resent him for the prior attack on their town. Through the Elder of Mysidia, he learns that to defeat Golbez, he must climb Mt. Ordeals and become a Paladin.[28] Before embarking on his journey, he is joined by the twin mages, Palom and Porom. On the mountain he encounters Tellah, who is searching for the forbidden spell Meteor to defeat Golbez.[29] Casting aside the darkness within himself, Cecil becomes a Paladin, while Tellah learns the secret of Meteor. Upon reaching Baron, the party discovers a mind-controlled Yang and return him to his senses. The party then confronts the King, only to discover that he had been replaced by one of Golbez's minions, Cagnazzo.[30] After defeating him, Cid arrives and takes them to one of his airships, the Enterprise. On the way, the party enters a room booby-trapped by Cagnazzo, where Palom and Porom sacrifice themselves to save Cecil, Tellah, Cid, and Yang.

On the airship, Kain appears and demands Cecil retrieve the final crystal in exchange for Rosa's life,[31] which the party obtains with assistance from a bedridden Edward. Kain then leads the party to the Tower of Zot, where Rosa is imprisoned. At the tower's summit, Golbez takes the crystal and attempts to flee. Tellah casts Meteor to stop Golbez, sacrificing his own life in the process. However, the spell only weakens Golbez, ending his mind control of Kain.[32] Kain helps Cecil rescue Rosa, who teleports the party out of the collapsing tower to Baron.

In Baron, Kain reveals that Golbez must also obtain four subterranean "Dark Crystals" to achieve his goal of reaching the Moon.[33] The party travels to the underworld and encounter the Dwarves, who are currently fighting the Red Wings. They defeat Golbez thanks to a sudden appearance by Rydia, now a young woman due to her time spent in the Feymarch, the home of the Eidolons. However, the party ultimately fails to prevent Golbez from stealing the Dwarves' crystal. With the help of the Dwarves, they enter the Tower of Babil in order to obtain the crystals Golbez has stored there, only to find that they have been moved to a surface portion of the tower. Yang later sacrifices himself in order to stop the tower's cannons from firing on the Dwarves (though he's later revealed to have survived). After escaping a trap set by Golbez, the party flees the underworld aboard the Enterprise, with Cid sacrificing himself to reseal the passage between the two worlds and to prevent the Red Wings from continuing their pursuit (he, too, is revealed later to have survived).[34] The party, now joined by Edge, the prince of Eblan, travels back to the Tower of Babil in order to take back the stolen crystals. Upon reaching the crystal room, however, the party falls through a trap door to the underworld. Meeting with the Dwarves once again and finding Cid to be alive, the party sets out to retrieve the eighth crystal before Golbez can. When the crystal is obtained, Golbez appears and reveals he still has control over Kain, while taking the crystal for himself.[35] After learning of the Lunar Whale, a ship designed to take travelers to and from the moon, the party return to Mysidia where the town's Elder and mages summon the ship.[36]

Arriving on the Moon, the party meets the sage Fusoya, who explains that Cecil's father was a Lunarian.[37] Fusoya also explains that a Lunarian named Zemus plans to destroy life on the Blue Planet so that the Lunarians can take over, using Golbez to summon the Giant of Babil, a colossal robot.[38] The party returns to Earth and the forces of the two worlds attack the Giant, including Palom and Porom, who have been revived. After the party breaks the robot, Golbez and Kain confront them, only to have Fusoya break Zemus' control over Golbez, in turn releasing Kain. Cecil learns that Golbez is his older brother.[39] Golbez and Fusoya head to the core of the Moon to defeat Zemus, and Cecil's party follows. In the Moon's core, the party witnesses Golbez and Fusoya kill Zemus, but then quickly fall to his resurrected form, the spirit Zeromus, the embodiment of all of Zemus' hatred and rage.[40] Back on Earth, the Elder of Mysidia commands all of Cecil's allies and friends to pray for the party, which gives Cecil and his allies the strength to fight and slay Zeromus. Following the battle, Fusoya and Golbez opt to leave Earth with the moon.[41] Cecil, at last accepting the truth, acknowledges Golbez as his brother, and bids him farewell.

During the epilogue, most of the cast reunites to celebrate Cecil and Rosa's wedding and their coronation as Baron's new king and queen, while Kain is seen atop Mount Ordeals, having vowed to atone for his misdeeds.
... [Full Description]