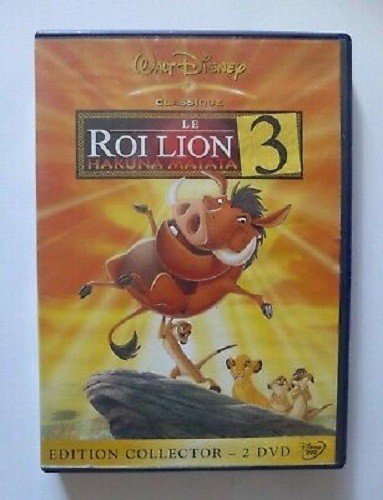 Tweet
Comfortably seated in front of their television set, Timon and Pumbaa decide to replay the story of the Lion King, but going back long before Simba was born. At that time, in the community of meerkats, Timon was considered a real ball by his congeners. He had to leave his family and met Pumbaa on the way, a warthog who would become his best friend. For a while, their carefree life ran parallel to Simba's without their paths ever crossing. One day, however ...

Bonus:
DVD 1:
- 7 cut scenes:
- opening concepts 1 and 2
- Buzz the fearless
- Timon talks to his father
- in search of the oasis
- Timon, his dad and his mom
- the presentation of Scurry
- Flinch and Sniff
- Games: Find the hidden Mickeys
- Clip: "" Can you Feel the Love Tonight "" by Star Academy 3

Other Products from mimi19600 (View All)