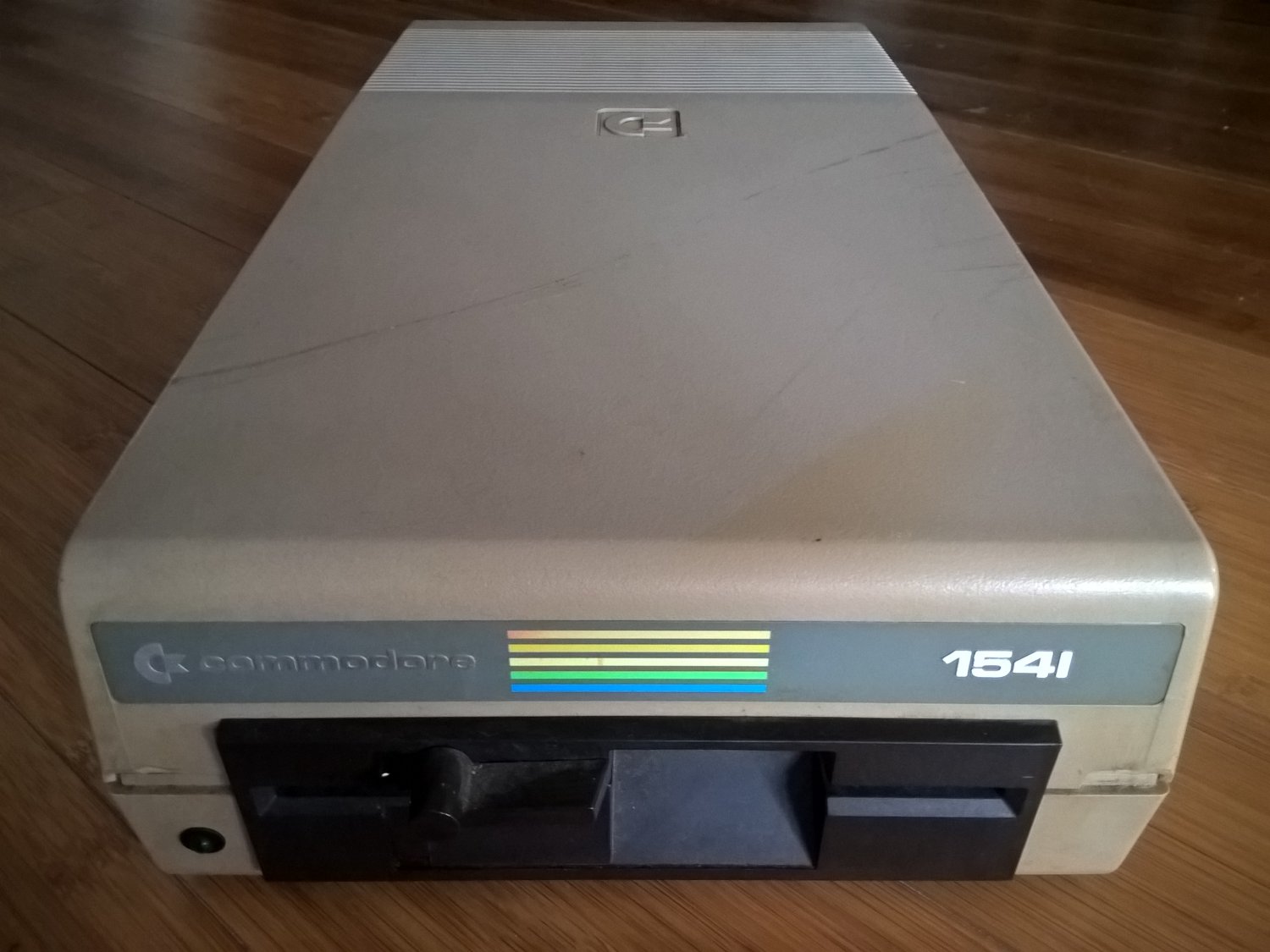 Description:
============
As pictured, a Commodore 1541 Floppy Drive. Includes just the shown unit ŌĆō no other accessories are available. Manual is available at http://www.commodore.ca/manuals/pdfs/commodore_vic_1541_floppy_drive_users_manual.pdf (contact us for link).

Warranty and Returns:
=====================
We understand that there may be compatibility issues, space constraints, or it just doesnŌĆÖt look perfect. This item can be returned within 14-days for ANY reason. However, shipping to and from is not refundable.

The disk drive uses group coded recording (GCR) and contains a MOS Technology 6502 microprocessor, doubling as a disk controller and on-board disk operating system processor. The number of sectors per track varies from 17 to 21 (an early implementation of zone bit recording). The drive's built-in disk operating system is CBM DOS 2.6.

By 1983 a 1541 sold for $300 or less. After a brutal home-computer price war that Commodore began, the C64 and 1541 together cost under $500.[citation needed] The drive became very popular, and became difficult to find. The company claimed that the shortage occurred because 90% of C64 owners bought the 1541 compared to its 30% expectation, but the press discussed what Creative Computing described as "an absolutely alarming return rate" because of defects. The magazine reported in March 1984 that it received three defective drives in two weeks,[4] and Compute!'s Gazette reported in December 1983 that four of the magazine's seven drives had failed; "COMPUTE! Publications sorely needs additional 1541s for in-house use, yet we can't find any to buy. After numerous phone calls over several days, we were able to locate only two units in the entire continental United States", reportedly because of Commodore's attempt to resolve a manufacturing issue that caused the high failures.[5]

The early (1982 to 1983) 1541s have a spring-eject mechanism (Alps drive), and the disks often fail to release. This style of drive has the popular nickname "Toaster Drive", because it requires the use of a knife or other hard thin object to pry out the stuck media just like a piece of toast stuck in an actual toaster (though this is inadvisable with actual toasters). This was fixed later when Commodore changed the vendor of the drive mechanism (Mitsumi) and adopted the flip-lever Newtronics mechanism, greatly improving reliability. In addition, Commodore made the drive's controller board smaller and reduced its chip count compared to the early 1541s (which had a large PCB running the length of the case, with dozens of TTL chips). The beige-case Newtronics 1541 was produced from 1984 to 1986.

1541C, the first upgrade version
All but the very earliest non-II model 1541s can use either the Alps or Newtronics mechanism. Visually, the first models, of the VIC-1541 denomination, have an off-white color like the VIC-20 and VIC-1540. Then, to match the look of the C64, CBM changed the drive's color to brown-beige and the name to Commodore 1541.


Commodore 1541-II, the second of two upgraded versions of the CBM 1541. The 1541-II has the more modern "radial handle" locking mechanism.
The 1541's numerous shortcomings opened a market for a number of third-party clones of the disk drive, a situation that continued for the lifetime of the C64. Well-known clones are the Oceanic OC-118 a.k.a. Excelerator+, the MSD Super Disk single and dual drives, the Enhancer 2000, the Indus GT, and CMD 's FD-2000 and FD-4000. Nevertheless, the 1541 became the first disk drive to see widespread use in the home and Commodore sold millions of the units.

In 1986, Commodore released the 1541C, a revised version that offered quieter and slightly more reliable operation and a light beige case matching the color scheme of the Commodore 64C. It was replaced in 1988 by the 1541-II, which uses an external power supply to provide cooler operation and allows the drive to have a smaller desktop footprint (the power supply "brick" being placed elsewhere, typically on the floor). Later ROM revisions fixed assorted problems, including a software bug that caused the save-and-replace command to corrupt data.

Successors
The Commodore 1570 is an upgrade from the 1541 for use with the Commodore 128, available in Europe. It offers MFM capability for accessing CP/M disks, improved speed, and somewhat quieter operation, but was only manufactured until Commodore got its production lines going with the 1571, the double-sided drive. Finally, the small, external-power-supply-based, MFM-based Commodore 1581 3┬Į" drive was made, giving 800 KB access to the C128 and C64.

Design
Hardware
The 1541 does not have DIP switches to change the device number. If a user added more than one drive to a system the user had to open the case and cut a trace in the circuit board to permanently change the drive's device number, or hand-wire an external switch to allow it to be changed externally.[6] It was also possible to change the drive number via a software command, which was temporary and would be erased as soon as the drive was powered off.

1541 drives at power up always default to device #8. If multiple drives in a chain are used, then the startup procedure is to power on the first drive in the chain, alter its device number via a software command to the highest number in the chain (if three drives were used, then the first drive in the chain would be set to device #11), then power on the next drive, alter its device number to the next lowest, and repeat the procedure until the final drive at the end of the chain was powered on and left as device #8.

Unlike the Apple II, where support for two drives was normal, it was relatively uncommon for Commodore software to support this setup, and the CBM DOS copy file command was not even able to copy files between drives--a third party copy utility must be used instead.

The pre-II 1541s also have an internal power source, which generate much heat. The heat generation was a frequent source of humour. For example, Compute! stated in 1988 that "Commodore 64s used to be a favorite with amateur and professional chefs since they could compute and cook on top of their 1500-series disk drives at the same time".[7] A series of humorous tips in MikroBitti in 1989 said "When programming late, coffee and kebab keep nicely warm on top of the 1541." The MikroBitti review of the 1541-II said that its external power source "should end the jokes about toasters".
... [Full Description]