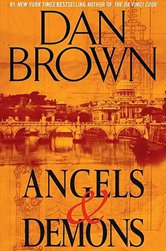 Tweet
Angels & Demons by Dan Brown, Hardback in Good Dust Jacket. Signed by Author. Published as First Atria Hardback Edition, June 2003.
Dust Jacket and Book in Very Good Condition with light wear.
When world-renowned Harvard symbologist Robert Langdon is summoned to a Swiss research facility to analyze a mysterious symbol — seared into the chest of a murdered physicist — he discovers evidence of the unimaginable: the resurgence of an ancient secret brotherhood known as the Illuminati… the most powerful underground organization ever to walk the earth.

The Illuminati has surfaced from the shadows to carry out the final phase of its legendary vendetta against its most hated enemy… the Catholic Church.

Langdon’s worst fears are confirmed on the eve of the Vatican’s holy conclave, when a messenger of the Illuminati announces he has hidden an unstoppable time bomb at the very heart of Vatican City. With the countdown under way, Langdon jets to Rome to join forces with Vittoria Vetra, a beautiful and mysterious Italian scientist, to assist the Vatican in a desperate bid for survival.
... [Full Description]