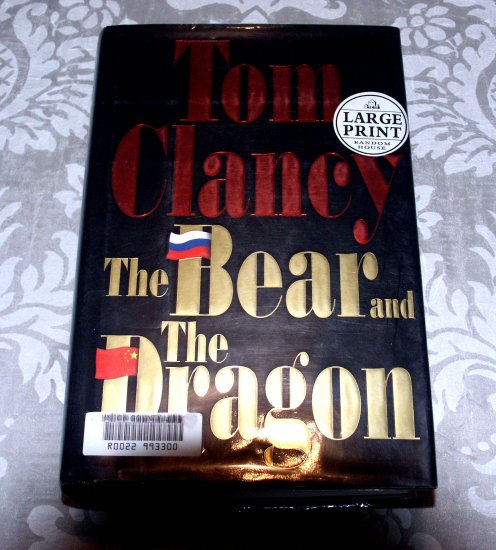 Power is delightful, and absolute power should be absolutely delightful--but not when you're the most powerful man on earth and the place is ticking like a time bomb. Jack Ryan, CIA warrior turned U.S. president, is the man in the hot seat, and in this vast thriller he's up to his nostrils in crazed Asian warlords, Russian thugs, nukes that won't stay put, and authentic, up-to-the-nanosecond technology as complex as the characters' motives are simple. Quick, do you know how to reprogram the software in an Aegis missile seekerhead? Well, if you're Jack Ryan, you'd better find someone who does, or an incoming ballistic may rain fallout on your parade. Bad for reelection prospects. "You know, I don't really like this job very much," Ryan complains to his aide Arnie van Damm, who replies, "Ain't supposed to be fun, Jack."
But you bet The Bear and the Dragon is fun--over 1,000 swift pages' worth. In the opening scene, a hand-launched RPG rocket nearly blows up Russia's intelligence chief in his armored Mercedes, and Ryan's clever spooks report that the guy who got the rocket in his face instead was the hoodlum "Rasputin" Avseyenko, who used to run the KGB's "Sparrow School" of female prostitute spies. Soon after, two apparent assassins are found handcuffed together afloat in St. Petersburg's Neva River, their bloated faces resembling Pokémon toys.

The stakes go higher as the mystery deepens: oil and gold are discovered in huge quantities in Siberia, and the evil Chinese Minister Without Portfolio Zhang Han San gazes northward with lust. The laid-off elite of the Soviet Army figure in the brewing troubles, as do the new generation of Tiananmen Square dissidents, Zhang's wily, Danielle Steel-addicted executive secretary Lian Ming, and Chester Nomuri, a hip, Internet-porn-addicted CIA agent posing in China as a Japanese computer salesman. He e-mails his CIA boss, Mary Pat "the Cowgirl" Foley, that he intends to seduce Ming with Dream Angels perfume and scarlet Victoria's Secret lingerie ordered from the catalog--strictly for God and country, of course. Soon Ming is calling him "Master Sausage" instead of "Comrade," but can anybody master Ming?

The plot is over the top, with devastating subplots erupting all over the globe and lurid characters scaring the wits out of each other every few pages, but Clancy finds time to insert hard-boiled little lessons on the vileness of Communism, the infuriating intrusions of the press on presidential power, the sexual perversions of Mao, the poor quality of Russian pistol silencers ("garbage, cans loaded with steel wool that self-destructed after less than ten shots"), the folly of cutting a man's throat with a knife ("they flop around and make noise when you do that"), and similar topics. Naturally, the book bristles like a battlefield with intriguingly intricate military hardware.